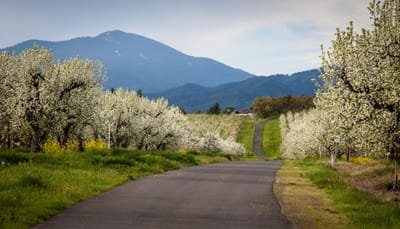 Medford sits in a rain shadow between the Cascade Range and Siskiyou Mountains called the Rogue Valley. As such, most of the rain associated with the Pacific Northwest and Oregon in particular skips Medford, making it drier and sunnier than the Willamette Valley.
In the past, Medford's economy was fueled by agriculture (pears, peaches, viticulture grapes) and timber products. The largest direct marketer of fruits and food gifts in the United States, Harry and David Operations Corp., is based in Medford. It is the largest employer in Southern Oregon, with 1,700 year round and about 6,700 seasonal employees in the Medford area. (1)
Medford's economy is driven primarily by the health care industry.(2) The two major medical centers in the city, Asante Rogue Regional Medical Center(3) and Providence Medford Medical Center, employ over 2,000 people. As Medford is also a retirement destination, assisted living and senior services have become an important part of the economy.